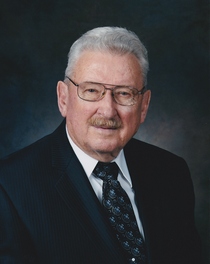 Rodger Engle Armstrong, age 80, of Union City, Ohio, passed from his earthly life into his heavenly home, on Wednesday, February 10, 2016.  He died peacefully at home with his loving wife of almost 55 years holding his hand.
Rodger was able to spend the last few weeks of his life surrounded by his wife, children, grandchildren, twin brother and many other family members as each person shared the love and special memories that they had known with Rodger in their lives.
â€œBut they that wait upon the Lord shall renew their strength; they shall mount up with wings as eagles; they shall run, and not be weary; and they shall walk, and not faint.â€  Isaiah 40:31.  This scripture exemplifies the faith that Rodger had in his personal relationship with his Lord and Savior.  His life was a testament of faith, strength, love and encouragement to all who knew him.  He had a special giving nature and always an encouraging word to uplift someone.
Rodger was born with his twin brother Rodney on June 13, 1935, to their parents, Harry Blaine and Adene Marie (Shockney) Armstrong.  He grew up on the family farm in Union City, Ohio.  Rodger graduated from Jackson High School in 1953, followed by service in the National Guard.
He met his wife Marion, who was raised in Mississippi and after they married in 1961, they established their home next door to where Rodger grew up.
Rodger and Marion were blessed with three children, Rachele Marie, Sharon Rose and David Joseph.  They have four very special grandchildren, Edward, Andrew, Zane and Jenna, and a beautiful baby great-granddaughter, Rose.
Rodger loved music and he was an accomplished piano player.  He also was an avid gardener, spending many hours creating a legacy of beauty in his flower gardens.  However, his most treasured times were those spent with his family.
He farmed for many years with his father and brother, owned a janitorial service, and worked for twenty years with the USPS, in Union City and Middletown, Indiana.  He retired in 2001, but continued to work as a courier for Romar Professional Services, a medical billing service that Marion owns.  The team at the business loved Rodger and were very supportive throughout his illness.
Rodger is survived by his wife, Marion; their children and grandchildren; Rachele (Bill) Marsh, of Naples, Florida, Sharon Armstrong, Union City, Indiana, and Sharonâ€™s sons, Edward Ruesga, Santa Barbara, California, Andrew (Jaclyn) and great-granddaughter Rose Ruesga, Union City, Indiana, David (Rhonda), and their children, Zane and Jenna Armstrong, Corydon, Indiana.
Rodger is also survived by his twin brother, Rodney Armstrong, Union City, Ohio, who was his best friend throughout life.  He is also survived by brother and sister-in-law; Jonnie (Gail) Glenn, Long Beach, California, Frank (Sydney) Glenn, and Ralph (Connie) Glenn, both of Petal, Mississippi.
Rodger is survived by his nieces and nephews, Cyndi, Mark (Sheila), Paul (Angela), Dan (Charity) Armstrong, Elisabeth (Mike) Esposito, Elizabeth Glenn Morris, Frank (Marilyn), Bryan (Cori), Jason (Sarah), Jonathan (Heather) Glenn, Teresa Foster Gatwood, and Richard Foster.  Many other relatives including great-nieces, great-nephews and Rodgerâ€™s Shockney cousins also survive.
Rodger was preceded in death by his parents, Harry and Adene (Shockney) Armstrong, sister-in-law Virginia Armstrong, mother and father-in-law, Ruby Glenn Williams and Ralph Glenn, step-father-in-law, Steven â€œSleepyâ€ Williams, sister and brother-in-law Linda and Rommie Lee Foster, and their infant daughter, step-grandson, Christian Ruesga, as well as aunts and uncles.
Rodger and Marion attend church at Bible Tabernacle, Muncie, Indiana.  Rodger will be greatly missed by their church family.
Visitation and funeral services will be held at Reichard Funeral Home, Union City, Indiana.  The visitation will be held on Sunday, February 21, 2016 from 4:00 to 7:00 p.m.  The funeral service will be held on Monday, February 22, 2016 at 11:00 a.m., with visitation open for one hour prior to the service.
If desired, contributions may be made to State of the Heart Care, Greenville, Ohio.  The Armstrong family would like to thank the State of the Heart Care staff for their caring and dedicated assistance during the last months.
Condolences may be sent to Marion and family at PO Box 452, Union City, IN 47390.


To order memorial trees or send flowers to the family in memory of Rodger Armstrong, please visit our flower store.