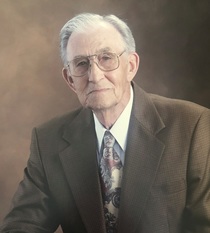 Ralph E. Welbourn, Jr, 98, passed away Monday peacefully at his home with his family by his side. He was born September 22, 1920 to the late Ralph E. & Inez Marsh Welbourn Sr.
As a young man Ralph traveled all around the country setting theatre seats, then settled down in Darke County to raise his family and start his farming business. He was still farming when he retired at 88 yrs. old. Farming and family were what he lived for.
Survivors include his son, John (wife Jimmie) Welbourn; 3 grand daughters, Ashley (Dustin) Leis, Billie (Wade) Hunt, Jonnie (Cody) Meyer; 6 grandchildren, Kelsie, Zachary, Sidnie, Aron, Matalin, and Joshua; and a sister, Sandra Parent.
He was preceded by his parents; wife of 58 Yrs., Gladys VanVickle Welbourn; daughter, Linda; grandson, John Welbourn Jr.; a brother, Barney; and a sister, Joan.
Visitation is 10 AM-12 Noon Saturday September 7, 2019 at the Reichard Funeral Home Inc., 400 W. Deerfield Rd., Union City, IN. Private services will be held immediately after. Burial will be in the Union City Cemetery.
Online condolences may be expressed at www.reichardfh.com

To order memorial trees or send flowers to the family in memory of Ralph E Welbourn, please visit our flower store.