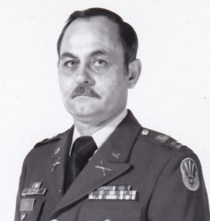 Donald K. Cook, 76, of Winchester, IN, passed away Saturday March 18th, 2017 in Winchester, IN.
Don was born April 21st, 1940 in Randolph County, IN son of the late Ernest Golden and Reba Doris Marsh Cook.
Don served the U.S. Army for 25+ years, three tours in Vietnam, and retired in 1995 as a highly decorated Army Major.
He was the father of Shelly and Jon Cook, a grandfather and great grandfather; other survivors include his brother, Rodney (wife Darla) Cook of Winchester, CA; four sisters, Hazel Sommer of Ft Wayne, IN, Colene (husband Phil) Wallace of Portland, IN, Linda (husband Ron) Jenkins, Cathy Cook both of Winchester, IN; numerous nieces, nephews, and cousins.
Preceded by his parents; 3 brothers, Richard Cook, William Cook, Bobby Cook; 2 sisters, Reva Curtner and Irene Fields.
Visitation is 11 AM - 12 Noon Tuesday March 21st, 2017 at the Reichard Funeral Home Inc., 400 W. Deerfield Rd., Union City, IN. Services are at 12 Noon Tuesday, with Pastor Matt Miller officiating, burial will follow at the Weimer Cemetery in Saratoga. Military Burial rites will be conducted by the Randolph County Honor Guard.
Memorial contributions can be made to the Journey Home for Veterans, 325 S. Oak St., Winchester, IN 47394, with envelopes available at the funeral home. Online condolences may be expressed at www.reichardfh.com

To order memorial trees or send flowers to the family in memory of Donald K Cook, please visit our flower store.