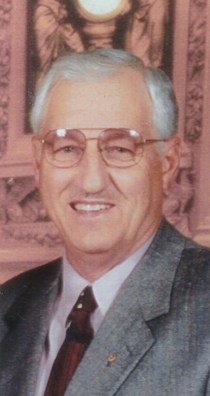 UNION CITY â€” Cloyce Junior Miller, 79, peacefully passed away at home on July 19th, 2017 after braving an extended illness.
He was born in Union City, IN on July 5th,  1938 to the late Wayne Miller and Helen (Smith) Miller.
Cloyce was a lifelong resident of Union City and graduated from East Side High School in Union  City, OH in 1956. He married his best friend, Sue Ann Bromagem, on June 26th, 1960.     They recently celebrated their 57th wedding anniversary.
Cloyce was a truck driver and farmer most of his life, operating a custom hay & straw baling business primarily transporting hay, straw and grain.  In the early years he worked with his father, Wayne, and beloved uncle, Paul Leon Miller.  In later years, his sons (Mitch & Vince) and daughter (Angela) helped out.  Dozens of area teenagers started their first job working for Cloyce and learned the value of hard work. Many have recalled fond memories of working for him and have expressed: â€œhe was like a second father to me.â€ In his later years, after retiring, he thoroughly enjoyed working with local farmer, Kent Thornburg.  Cloyce was a member of the Union City, Indiana Lions Club for 49 years.
Cloyce and his loving wife, Sue, exemplified the perfect partnership throughout their marriage and was an inspiration to their children and all who knew them.  He loved to laugh and his biggest joy came from spending time with his family. He was very proud of his grandchildren, attending their dance recitals and sporting events.  He enjoyed the outdoors, sports, old Western movies, classic country music, puzzles, vegetable gardening and traveling across the US (49 states, excluding Hawaii) and overseas.  Love and devotion to his family epitomized Cloyceâ€™s life.
Cloyce leaves to cherish his legacy and memory his wife and best friend, Sue; children, Mitchell (Diane) Miller of Tamarac, FL, Angela (Paul) Armstrong of Union City, OH, Vince (Heather) Miller of Pendleton, IN; sisters, Carol (John) Smith, Saratoga, IN, Judy (Steve) Spence, Union City, OH; grandchildren, Zach and Amanda Armstrong, Taylor, Quentin and Trent Miller; uncle, Paul Leon (Betty) Miller of Portland, IN and many cousins, nieces and nephews.
He was preceded in death by his father, Wayne; and mother, Helen.
The family would like to express a heartfelt thank you to the staff from IU Health Ball Memorial Hospice for exceptional care.
Visitation will be Wednesday, July 26th, 2017 from 5:00 â€“ 8:00 p.m. at Reichard Funeral Home Inc., 400 W. Deerfield Road, Union City, IN  47390.
Funeral Service are 10:30 a.m. Thursday July 27th also at the funeral home with Pastor Bruce Bryan officiating.  Burial will follow in the New Lisbon Cemetery in Union City.
In lieu of flowers a donation may be made to: Pleasant Hill Church, 9945 N 800 E, Union City, IN 47390; Union City Lions Club, in care of Troy Rose at 1501 W state Route 28, Union City, IN 47390; or IU Health Ball Memorial Hospice, 2401 W University Ave., Muncie, IN, 47303 with envelopes available at the funeral home.

To order memorial trees or send flowers to the family in memory of Cloyce Junior Miller, please visit our flower store.