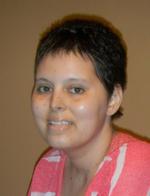 Carly Elaine Mangas, 26, of rural Union City, IN passed away Saturday April 14, 2012 peacefully at her hospice home surrounded by family and friends following a courageous battle with T-Cell Lymphoblastic Lymphoma/Leukemia.

Carly was born December 2, 1985 in Winchester, IN, the daughter of Cynthia Sue (Weiss) Mote of Union City, IN, and Christopher Leon Mangas of Winchester, IN.

She graduated from Union City Community High School in 2004 and the University of Southern Indiana in 2008, with a Bachelor of Science degree in English.  She had been a substitute teacher at Richmond High School and enjoyed working in the Life Skills classroom.  Carly was a member of the National and Indiana State Milking Shorthorn Societies, as well as the Trinity Lutheran Church.  Recently becoming more active in charity and spending time with family and friends.

She was preceded in death by her grandparents Glendora Weiss, Phil and Joyce Mangas and Gerald and Esther Mote, and her aunt/godmother Judy Weiss.

Family and Friends may call from 4-8 PM Tuesday April 17, 2012 at the Reichard Funeral Home Inc. 400 W. Deerfield Rd. Union City, IN, and one hour prior to services at the Church.

Celebration of Life Services will be held at 11:00 AM Wednesday April 18, 2012 at the Trinity Lutheran Church in Union City, IN, with Pastor Gill Krouse officiating.  Burial will be held at the convenience of the family.

In lieu of flowers, memorials may be directed to the Indianapolis Light the Night Walk, in memory of Carly Mangas and her Cancer journey hosted by the Leukemia and Lymphoma Society or the Trinity Lutheran Church with envelopes available at the funeral home.  Online condolences may be expressed at www.reichardfh.com.

To order memorial trees or send flowers to the family in memory of Carly Elaine Mangas, please visit our flower store.